November has been pretty hot and dry here in the Sunshine Coast Region with one notable exception, that being a short lived but destructive storm which swept through the hinterland around the middle of the month creating the perfect conditions for some of our frogs to make their way from the treetops to the ground to breed in the temporary pools and soaks created by the heavy rains. Conditions on that night were hectic but based on the local species calling around my property during the following week or so, the storm was a welcome kick start to breeding for many of them. Reptiles on the other hand have been relatively slow to react with very little activity evident around my home which normally has a multitude of species going about the business of finding a mate and stocking up on tucker after the winter. Hopefully the season improves with many more opportunities to observe and photograph our magnificent reptile and amphibian fauna around the Sunshine Coast region and south east Queensland areas.

Early in November the Queensland Frog Society held two frog workshops, one in the Mary Cairncross Reserve at Maleny and the other a week later at the Kilcoy Information Centre, Yowie Park, Kilcoy. Both workshops were well attended by locals keen to expand their knowledge of the species of frogs present within their communities and were a resounding success. The information provided regarding species and their habits was excellent and many attendees were keen to find out more about Cane Toad traps and control of this invasive pest species. Both workshops were followed by a sausage sizzle and a get together before a short walk to familiarise the attendees with some of the frogs local to their area. Unfortunately the weather wasn’t the best for the frogs with only one species the Great Barred Frog (pictured below) making an appearance at Mary Caincross Reserve however a couple of large Carpet Pythons made for an interesting diversion for those who stayed for the walk.

One of the spiders which helped to confuse those new to spotlighting with their twinkly diamond like eyeshine.

The spotlighting at Kilcoy on the other hand was far more productive with six or seven species identified on the night. Once again conditions were far from ideal with very strong winds and cold evening temperatures however some of the frogs obliged with many calling and others seen hopping around the edges of the lake and river habitats.  For many of the attendees it was their first introduction to spotlighting for eyeshine and the reactions of some of the people particularly the younger ones were priceless. Species sighted were Striped Marsh Frogs, Spotted Marsh Frogs, Eastern Sedge Frogs, a Green Tree Frog, Striped Rocket Frogs, Stoney Creek Frogs and the ubiquitous Cane Toad although not all species were photographed on the night. Thanks to the society and all those involved in setting up and conducting the workshops, they are a great community service raising awareness for our struggling frogs.

This Eastern Sedge Frog from beside the lake in Yowie Park has a strange fungal like protrusion emanating from its snout. It’s not something that I have seen before and I have passed the photo onto Harry Hinde of Parks and Wildlife in an effort to identify the issue. 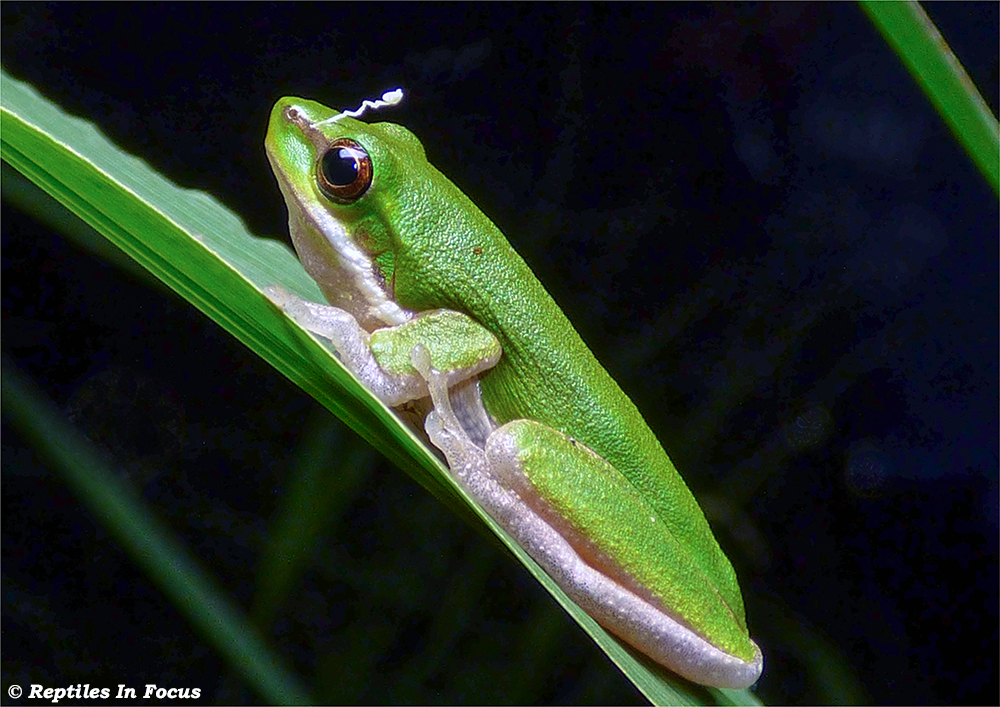 One of the Striped Rocket Frogs found on around the drains.

A Spotted Marsh Frog many of which were seen jumping around in the grass adjacent to the lake. 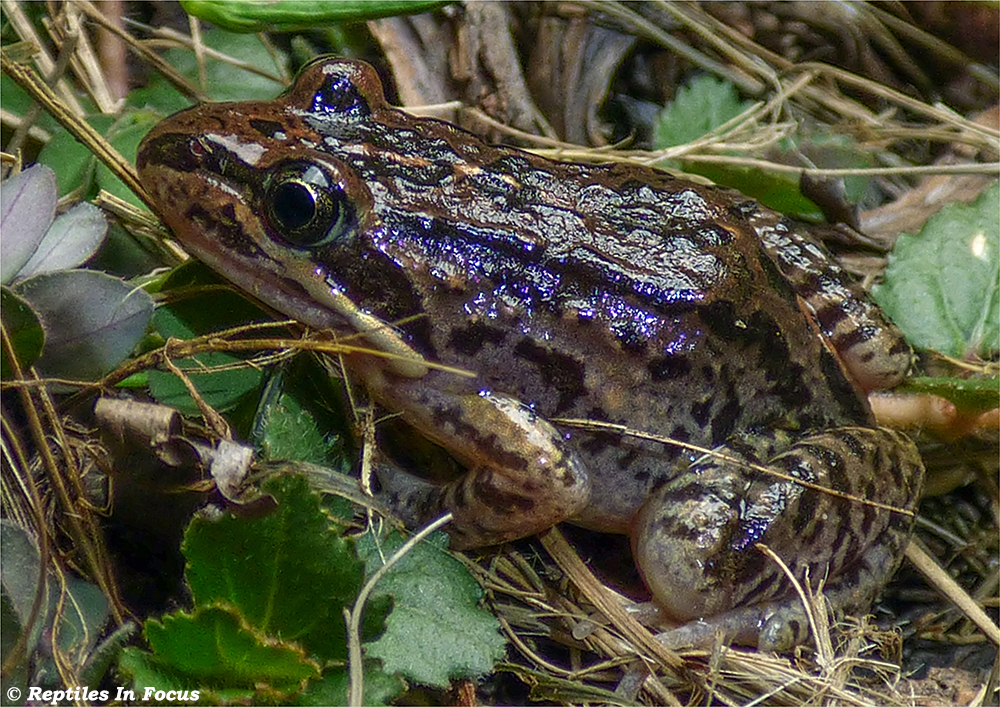 A week after the last workshop the aforementioned storm broke over the Sunshine Coast Hinterland and the conditions seemed too good to pass up despite considerable damage to vegetation and road blockages. A mate and myself headed west into the ranges for a short (seven hours in the end but who’s counting – time flies when you’re having fun) drive/walk spotlighting trip. Snakes were noticeably absent although we did see one Brown Tree Snake early on in the evening and a sub adult Carpet Python (pictured below) towards the end of the night. 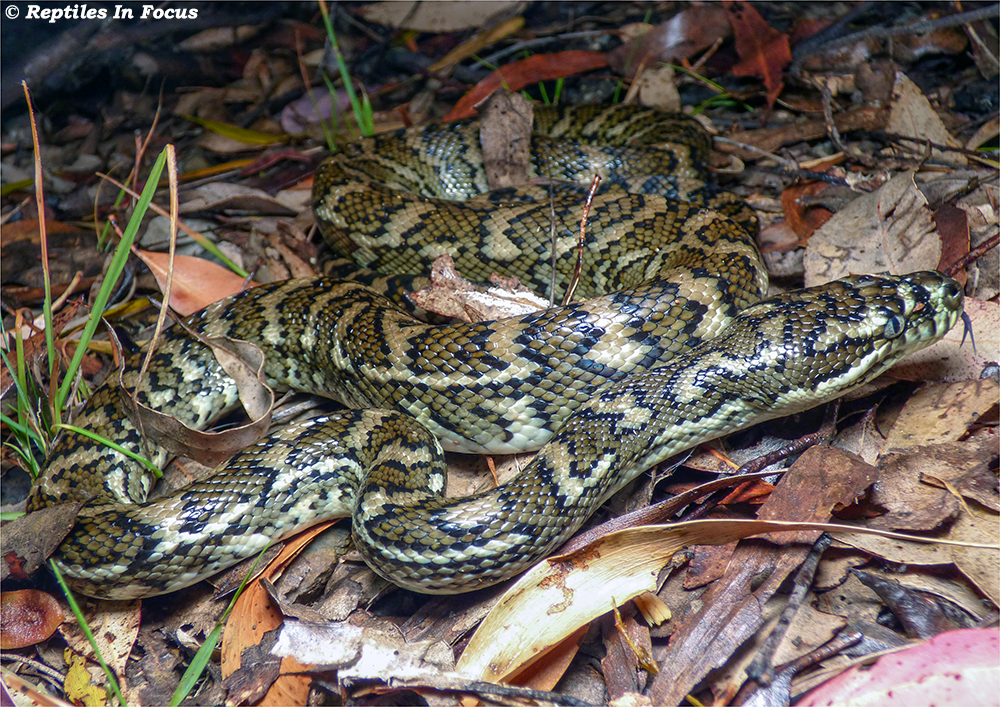 The most abundant species encountered was the Southern Orange-eyed Tree Frog. Not surprisingly as these frogs rely on heavy downpours to activate their breeding response when they head down from the tree tops to call and breed in the temporary soaks and puddles created by the storm. Many, as seen in the first photograph below were still climbing down to get involved in the action when we arrived at the first of the temporary puddles created in the drainage ditch beside the road. The noise was deafening at close range and our close proximity to the calling fogs did not seem to interrupted them at all. 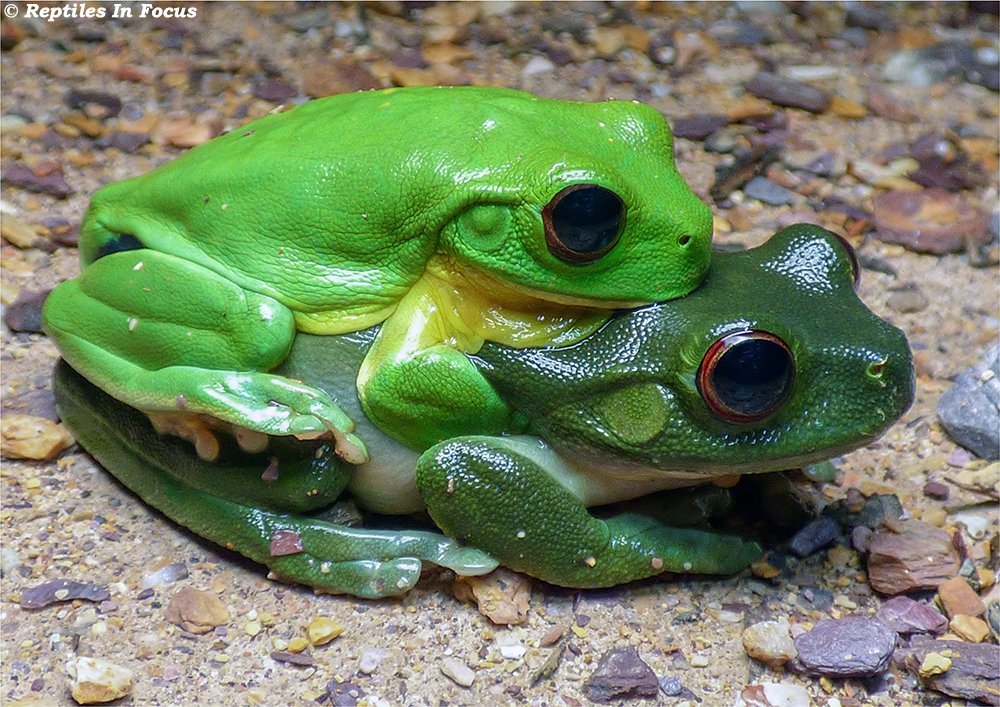 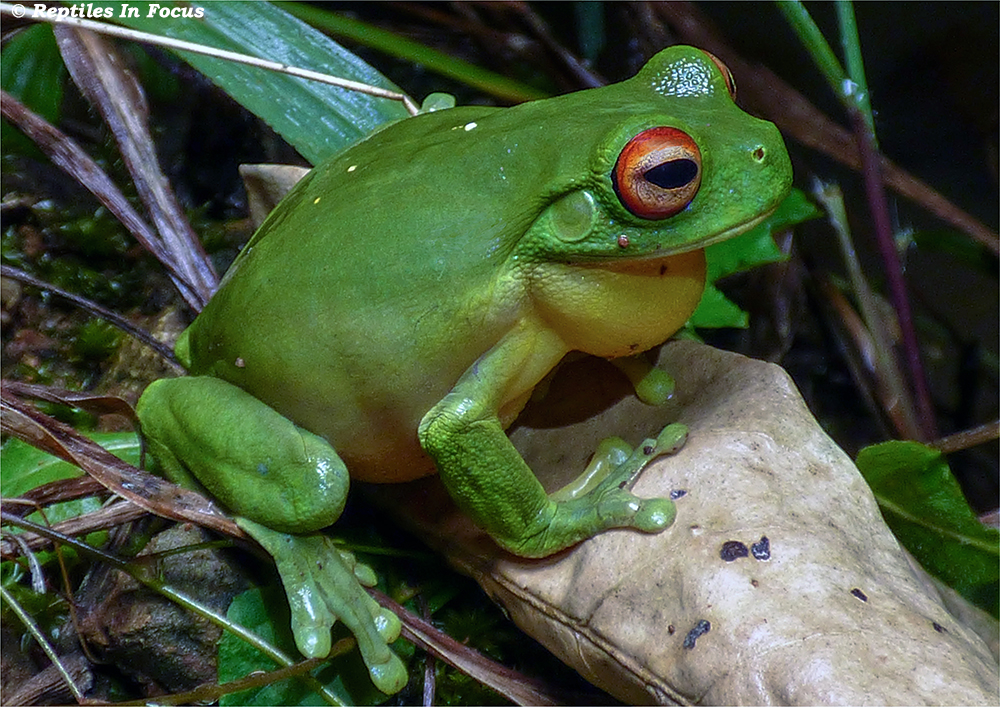 Coloration varied from light to dark green and one individual which was photographed beside a fast flowing creek rather than in the soaks had quite a few patches of blue on its back and legs. Jono Hooper from the Queensland Frog Society has since informed me that the cause of this phenomenon is a lack of yellow pigment in the skin under the blue patches. A trippy looking frog. 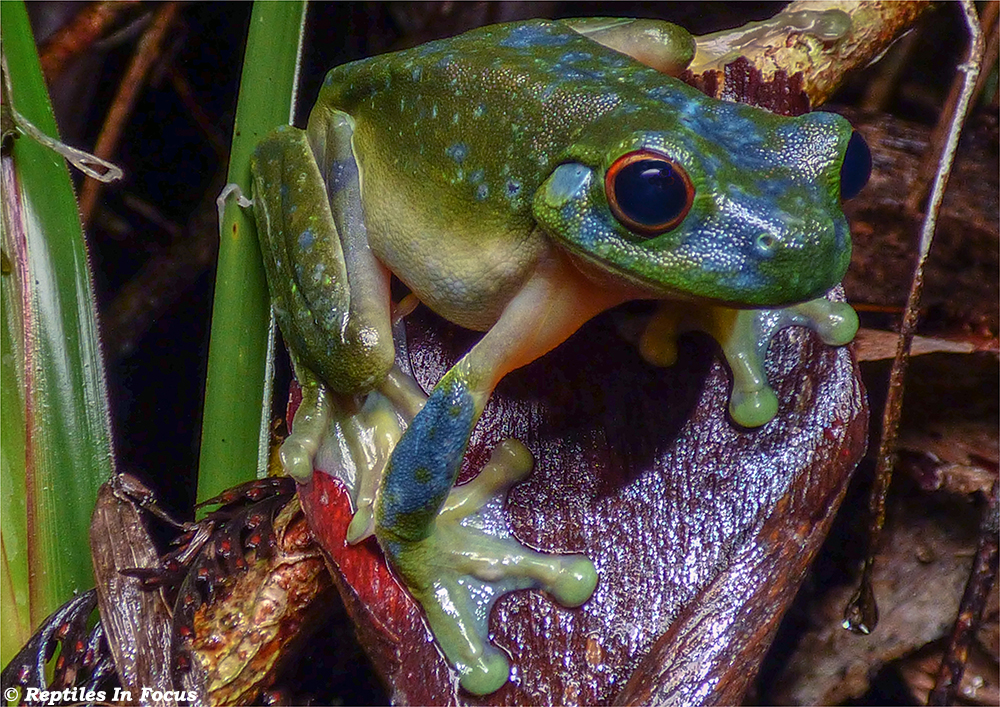 A number of other species were sighted and heard on the night including many Great Barred Frogs, a common species here on the coast. A lone Giant Barred Frog which was in the process of munching on a large prey item possibly a cricket and a handful of Cascade Tree Frogs were also recorded. The later  are both classed as vulnerable species and are always welcome finds when frogging in the Sunshine Coast hinterland.

One of the many Great Barred Frogs heard calling on the night. 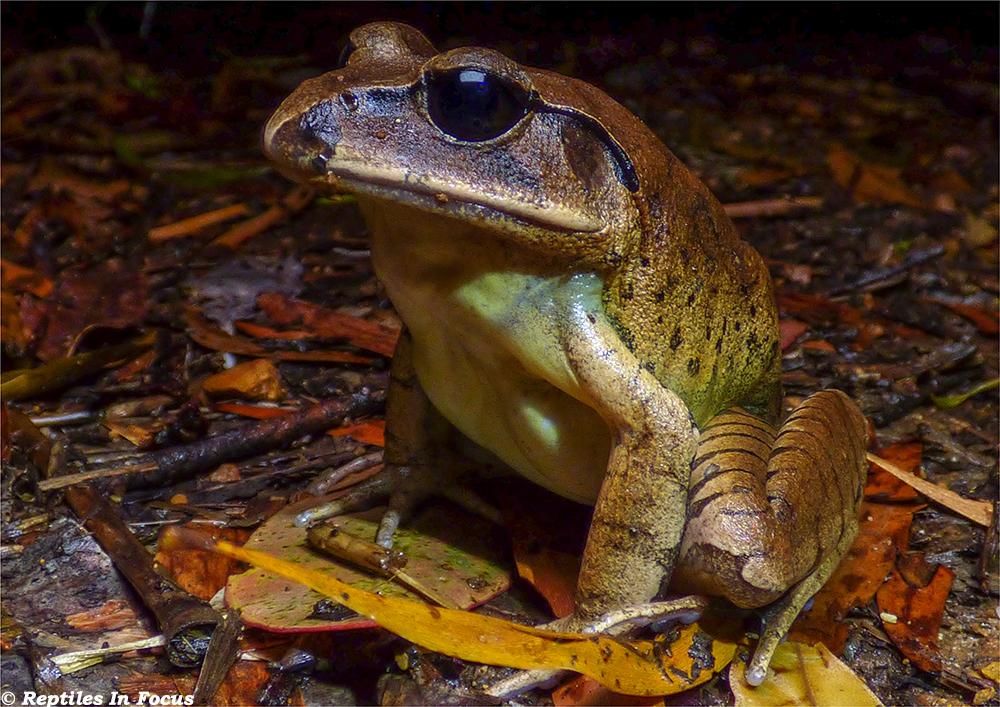 Giant Barred Frog possible tucker, a King Cricket. These insects can be huge and probably more than capable of preying on smaller to medium sized frogs. This fella was up in a tree rather than amongst the leaf litter. I have seen evidence of them killing and devouring an adult Blackish Blind Snake in the past so they are definitely a formidable predator of the rainforest. 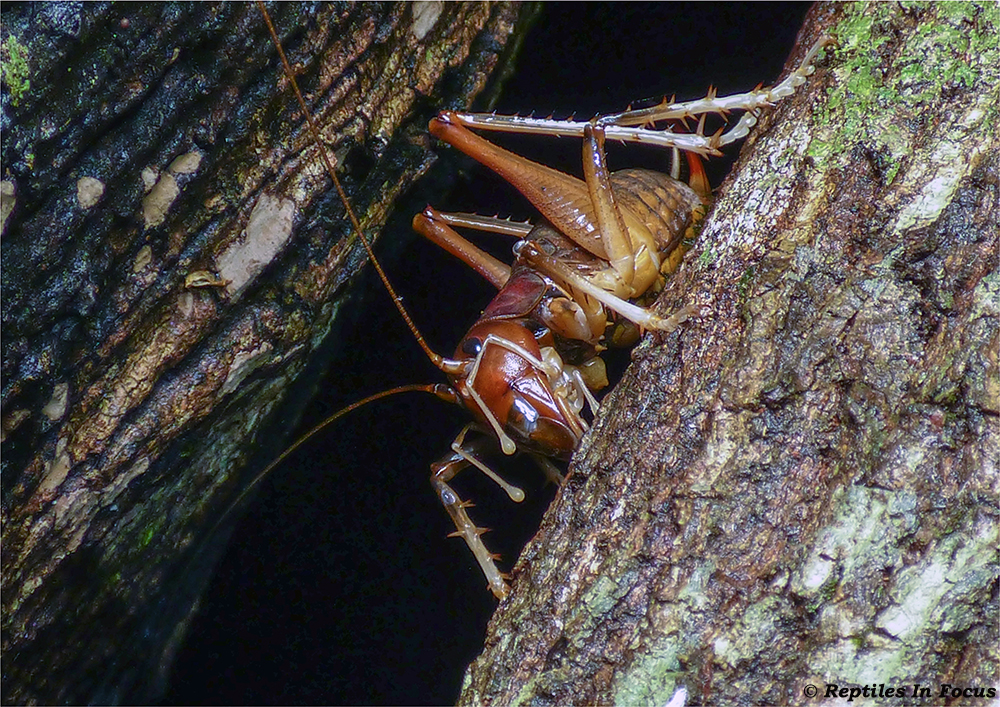 A couple of the Cascade Tree Frogs found beside a fast flowing creek. 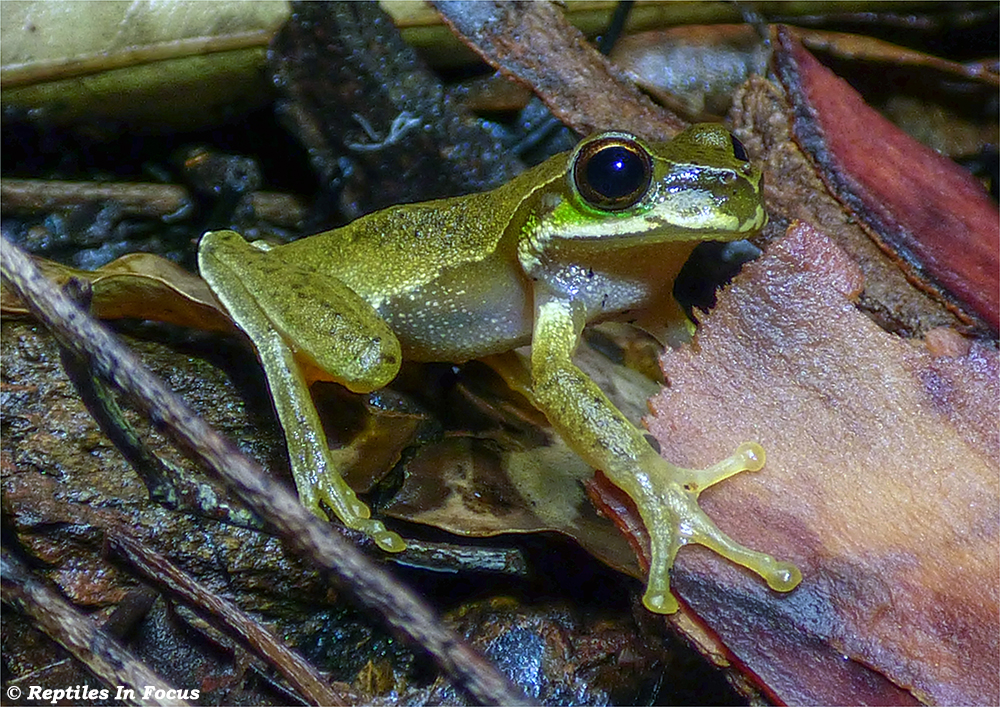 We are currently experiencing yet another heat wave with hot and dry winds predominating and causing extreme bush fire prone conditions. With a forecast of almost a week of the same still to come we don’t expect to be able to find or photograph too many critters until it’s over. It’s too bloody hot to be out and about anyway. Here’s hoping that we are spared from the horrendous bush fires raging over much of the state at the moment and our thoughts are with all those affected. To the fire fighters risking their own lives to protect us thank you, you are all doing an amazing job and we and the wildlife dependent upon the remaining patches of bushland scattered throughout the state salute you.